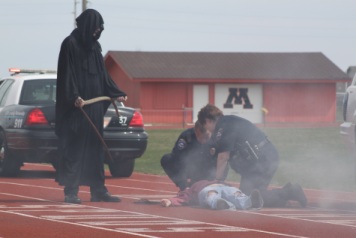 Imagine the impact you could make on a young adult’s life if you could show them a glimpse of their future should they choose to drive a motor vehicle after consuming alcoholic beverages. Now multiply that by over eight hundred and you will have the motivation behind the intense two day program City of Moorhead Police recently presented to local high school students entitled "Every 15 Minutes".

Initiated in Pennsylvania in the mid 1990's, "Every 15 Minutes" is a four part program that aims to provide high school juniors and seniors the closest thing possible to the real life experience of losing someone they know and love to an alcohol related accident. The name signifies the number of people killed in the United States from an alcohol related accident when this program was started. Since its inception, the national average has improved to one death every thirty-three minutes. While this program has been utilized nation-wide over the past fifteen years, it is relatively new to Minnesota. Only two other agencies in the state have participated so far.

On April 27th, 2011, Moorhead High School students were surprised when a police officer dressed as the grim reaper, with scythe in hand, entered their classrooms one at a time and removed their peers. A uniformed officer would follow and read an obituary, written by those students' parents. This occurred a total of twenty-seven times over the course of three hours, signifying the number of deaths nationwide (statistically) in the preceding forty-eight hours. Anna Dalen, a Moorhead High senior, told reporters present that she didn't think it was going to be a big deal going into it. After hearing her own obituary read aloud, however, she admitted to being, "A bit shaken."

As the number of "Living Dead" increased, they were placed in multiple locations throughout the school during class breaks, after being made to appear deceased. The "Living Dead" students remained absolutely still as their peers passed by and read the obituaries they held. While most students passing by were initially confused and curious, they were somber and respectful as the day continued.

During the last hour of the school day, all juniors and seniors were escorted to the football stadium where a mock crash was presented. Seven juniors and seniors participated in this crash that resulted in one fatality and multiple injuries. City of Moorhead Police, Fire, FM Ambulance, Sanford Health Life Flight and Wright Funeral Home assisted with this presentation.

Eight hundred students were completely quiet and first responders performed CPR on the driver of the victim vehicle. The driver of the other vehicle was processed through field sobriety tests and subsequently arrested for DWI. Two passengers were taken to the hospital with serious injuries and the rest were released to their parents. Just as the student body began stirring and talking quietly amongst themselves, a hearse arrived to remove the driver of the victim vehicle, who died from her injuries with the grim reaper standing over her. Silence filled the stadium again as her body was removed, with the grim reaper walking solemnly behind the hearse as it drove away.

When the mock crash was completed, most students were dismissed for the day. The thirty four students who were involved with the "Living Dead" and mock crash, however, were not. When one of these students "died", they also lost their cell phones, laptops, and all communication with the outside world. They were secluded from all friends and families to emphasize the effects their dead would have on their community. They were taken to a local hotel where they spent the night. While there, they were asked to reflect on what they had witnessed and experienced throughout the day and write a letter to their parents that started with, "Dear Mom and Dad, Today I died in an alcohol related accident and I never got to tell you......." Some students took over two and a half hours writing their letters and everyone in that room, adults included, was emotionally drained by the end.

A short time later, police officers and school counselors met with those students' parents. The parents were told all about how the day went and then told about the letters their children were writing to them. The parents were asked to go home, sit alone in the quiet, and write letters to their children telling them what they would say if they could talk to them one more time.

The next morning, the parents and their children were reunited and their letters, which remained sealed overnight, were exchanged. The families were given time to themselves to read their letters to each other before all juniors and seniors again joined them in the auditorium for an assembly. This was a very emotional exchange, with very few dry eyes in the room.

The pinnacle of the program was the hour long assembly, billed as a memorial service for the student killed in the previous day's crash. Complete with a coffin on stage and a memorial video playing as students entered, the mood was set. The assembly was started with a video compiled by Minnesota State University - Moorhead sophomore Mike Schreifels. This video portrayed the previous day's crash including events leading up to and after the crash. Included in the video was the death notification on the victim's mother, the emergency room treatment of the seriously injured passengers and the booking/arraignment of the drunk driver.

Following the video, two brave families got on stage and shared their personal letters written the night before. This added a personal touch as students got a glimpse into their peers' families and the damage that would have resulted had this tragedy been real.

The final part of the assembly included two individuals who had already experienced this kind of tragedy in their own lives. First to speak was Elizabeth Parrow-Hawkins. Elizabeth lost her husband and daughter in 1998 when a drunk driver ran a red light and jumped a ditch in Moorhead. The drunk driver collided with truck driven by Elizabeth's husband. Both were killed instantly by the drunk driver when the top part of the cab was ripped off while the drunk driver was still airborne. Elizabeth shared personal memories of her family and told of how she is still dealing with this in her own way. Following Elizabeth's presentation, another speaker took the stage. When he asked the student body if they could have forgiven the man who caused that accident, nobody raised their hand. He then told them that he was that man.

While Everett Contois was not the driver of that crash, he did cause a crash in 1995 that killed a man in Fridley, MN. The audience was completely speechless as Contois detailed his lifestyle and attitude before that fateful night. In grim detail, Contois explained how he fled from over twenty police cars from at least seven jurisdictions as they tried to stop him. "What did stop me," Contois said, "Was a guy driving home from work, minding his own business." Contois T-boned him and the pursuit ended. "He never knew what hit him," Contois said.

Contois explained to the student body that it did not matter that he now has six years of college education and a degree in business management from Minnesota State University-Mankato. Contois spent fourteen years in prison for homicide and told the students that nobody hires felons or gives them loans. Contois said he was laughed out of McDonald's when he applied and now makes minimum wage cleaning disgusting stains from vehicle carpets fifty to sixty hours a week. "Don't feel sorry for me," He concluded, "This is just the way it is. Don't make the same mistake I did." For the duration of the hour long program, over eight hundred and fifty students and guests were completely still and did not make a sound.

While we may never know the full impact of this program, the initial feedback has been positive. One parent said in an email that, "This has been not only a positive effort that created a benefit to the public, it really gave our family another chance to really search our souls, and communicate with each other and bond. It was not easy, but it was VERY well worthwhile." One of the students that attended the retreat wrote in a letter that because of this program, she does not want to take life for granted anymore. "Knowing how my family took the whole thing," she wrote, "Makes me want to be more responsible."

We will never know the impact that this program has had on the student population at Moorhead High. We have conducted pre-program surveys and plan on conducting post program surveys in the near future. In the end, if even one student makes the right choice and does not drink and drive or answer that text while driving, we will have not spent this time in vain. Every 15 Minutes will be presented every two years in the Moorhead High School, allowing all students the opportunity to experience this valuable program.